On Sunday October 28th 2012 I was privileged 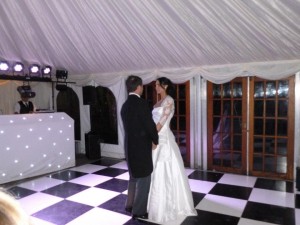 to be Amy and Stephen Ansells Wedding DJ out at one of my favourite venues…The Inn At Whitewell. 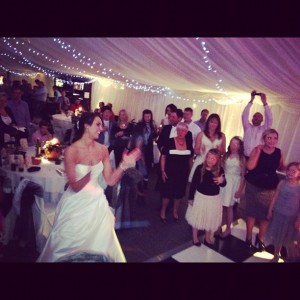 All aboard the Love Train!

I arrived at Whitewell bright and early to set up before the wedding party entered the marquee before their wedding breakfast. In doing this it allows me to get a feel of what the wedding is going to be like and what the bride and grooms guests are like. The weather was awful,the rain was really pouring down but this did not dampen the party atmosphere at The Inn at Whitewell.

Howard Wing was on hand to act as toastmaster and to sing one or two classic swing tunes throughout the wedding breakfast. His set included Feeling Good and Fever plus his amzing finale….which is a secret,you will have to book him to experience it!!

With pumpkins as table centre pieces, a Trick or Treat Sweet Stall and Autumn Leaves everywhere the Inn At Whitewell had a very Autumnal end of October feel to it. The night kicked off with a bang with Amy and Stephens first dance by The Foo Fighters followed by Howard Wing getting the night going with some up tempo tunes which everyone was loving. We then do a transformation where I start my part of the evening mixing in with Howards music,this works great as people are still dancing without noticing I have taken over. Amy owns a DanceStudio so most of her friends were good dancers as were one or two of her guests who I imagine are her pupils! 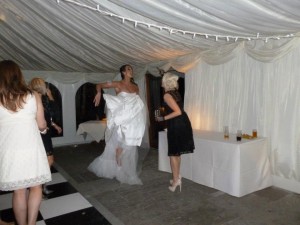 The dancefloor was packed all night with me playing a mix of upto date chart music such as Gangnam Style by Psy mixed up with 90s classics such as Sweat by Innercircle and Tweets Boogie 2nite which was a favourite tune of the brides!

I am quite sure that if the party bus had not come to collect the Burnley/Colne Posse we would have still been there now partying hard! Congratulations to Amy and Stephen,have a fantastic honeymoon and see you real soon I hope. 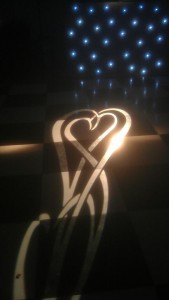