Wedding In The Eye Of The Storm.

Back in December Britain and especially Cumbria were battered by one of the worst storms in living memory…Storm Desmond. I was booked at The Wild Boar on Friday December 4th and 5th to work on Christmas Party Nights followed by Hayley and Jamie Traynors Wedding on the Sunday. 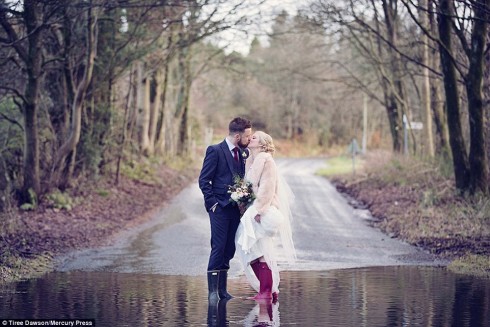 The Friday night went by without a problem,when guests were leaving at the end of the night we noticed how hard it was raining but did not think anything of it. Saturday morning came and it had not stopped raining, in fact it was raining hard than ever and was getting windy. We had Breakfast hoping to travel down to Windermere to get some Christmas shopping done but the rain was just getting harder and harder. We decided just to hang around the hotel and wait for Night guests to arrive for the Christmas Party and to also wait for Hayley and Jamie and their Wedding guests to arrive.

This is when we started to hear and see horror stories via Social Media and the news of what was actually going on outside. Rain was landing on already saturated ground and was beginning to flood large areas very quickly. As I have a 4×4 vehicle I was asked by The Wild Boar manager Adam if I could go and collect Emma The Wild Boar Wedding Co-ordinator from about 3 miles away. This is when I got to see how really bad things were getting, on the journey to her the water was about 15 inches deep in places and rising quickly. I got her back to the Hotel safely, this is when we started to worry about Hayley and Jamie and their guests who were travelling to the Hotel from the Ormskirk area. 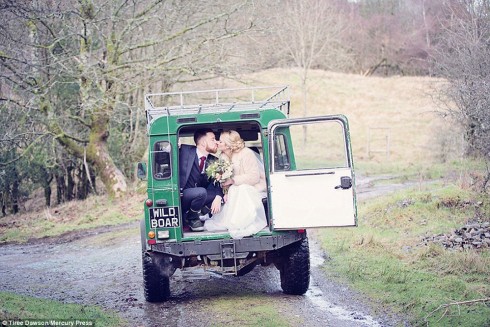 As there is no phone reception at The Wild Boar the easiest way to contact people is to use the Hotel WiFi and contact them via Social Media. Michael Coates had joined us by now as he was suppose to be having a Clay Pigeon Shoot with Hayley and Jamie that afternoon. Michael bravely went out in his own 4X4 helping Hotel Staff and friends in the area. 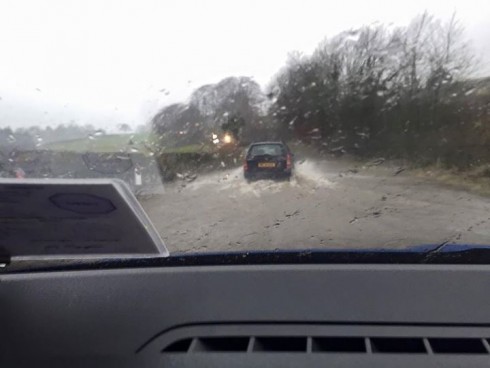 Jamie, Hayley and their parents had now been on the road for a number of hours battling their way through some horrendous conditions. By using landline phone calls and Social media we managed to guide Hayley and Jamie safely to The Wild Boar, I think their journey took them about 6 hours. We were so pleased to see them, Jamie was adamant his Wedding was going to go ahead come what may. 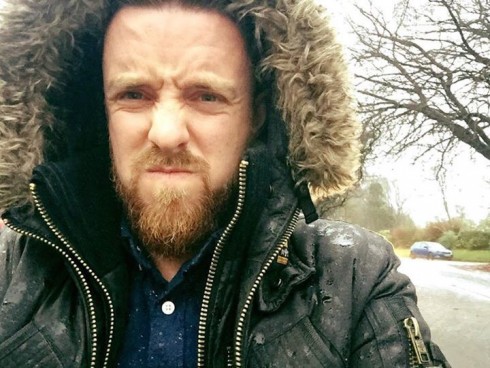 By this time my Saturday Christmas Party had been cancelled which really did us a favour as we could concentrate on getting the rest of the Wedding Party safely to the Hotel which is what we did again via Social Media. We did however find a couple of parties who were stranded in their cars with their children. 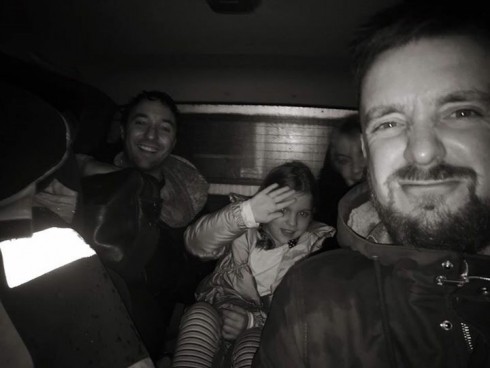 Rescue in My Car

By this time it had gone dark but we knew roughly where they were, about 4 miles from the Hotel. Jamie and myself went out in my trusty 4X4 to see if we could find them. The Weather by this time was really wild, it was still raining hard, there were deserted cars everywhere, it really was like something from a Hollywood movie. We managed to find Car 1, the only problem was a pool about 200 meters across  and about 1 meter deep lay between us and them. The only option was to wade across and fireman lift guests and their luggage to my car. As Jamie said and I quote “we are testicle deep now!” I had to make this rescue twice, the second time on my own as I had to collect 5 guests with luggage. Once we got everyone to The Wild Boar the atmosphere was amazing, everyone was safe! Some guests were in Kendal but were okay. 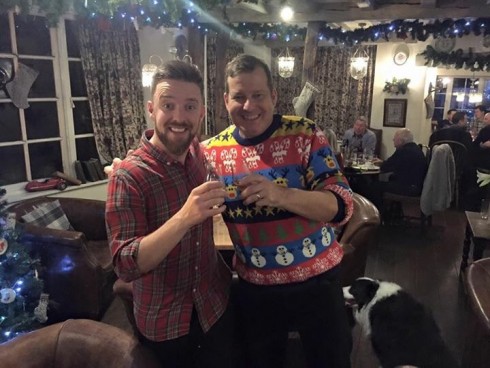 Adam and Emma from The Wild Boar were brilliant, they organised a meeting with Hayley and Jamie to discuss what would happen if The Registrars did not turn up. As their hairdresser was travelling from Ormskirk we decided to contact the fabulous Gareth and Stew at Aqua Salon in Windermere who said they would come along and help. We had also been in touch with the fantastic Tiree Dawson who was working at The Merewood Hotel that night, she was stuck there but said she would be along come what may. I also had been in touch with Jane and Jason at Flower Design keeping them updated on what was happening. 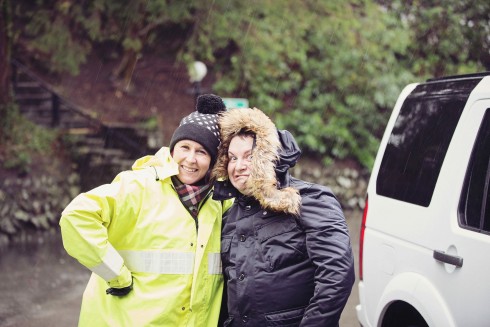 When we woke up on Sunday Storm Desmond had left a path of destruction but the sun was actually shining, the calm after the storm. I was up early as I had promised to try and collect Gareth the hairdresser from Windermere. What I saw was unbelievable, cars abandoned everywhere…just a trail of devastation. On my journey even I was getting worried, the water level was up to my doors but luckily I got through. 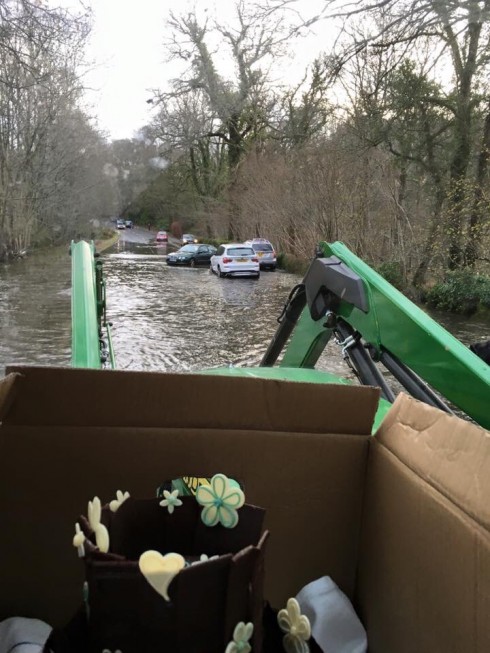 Tiree Dawson managed to grab a lift from a Farmer friend of hers on a Tractor….along with a spare Wedding Cake! That lady is just unbelievable. Jason from Flower Design managed to make it to the Hotel with the Wedding Flowers, Hayley was so happy that they arrived in one piece.

Hayley and Jamies Wedding Day was brilliant, the Registrars manged to get to the Hotel in one piece. The atmosphere all day and night was electric….it truly was an honour for me to be part of their day. 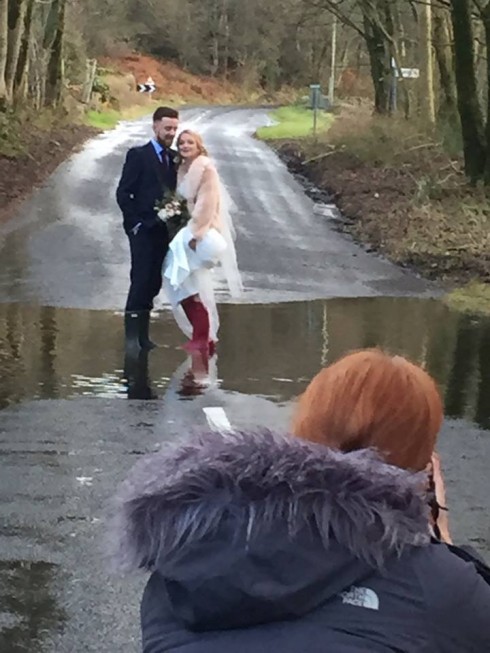 Tiree Dawson and That Picture

Even more amazing was that I sent a Tweet message out of Hayley and Jamie being photographed in their Wedding attire in a huge puddle, by the Wednesday of that week their picture had been in most national newspapers including The Times, national TV and on the radio. What could have been a disaster turned into a brilliantly amazing Wedding Day…in fact probably the most recognised Wedding in the UK that year. I have actually been told that if Hayley and Jamie in the future have a Baby son Desmond will be one of his names. 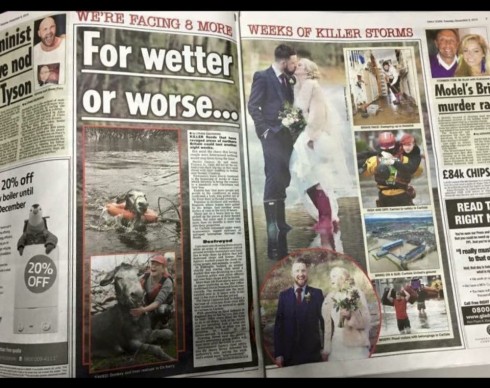 Here is to you Hayley and Jamie….have a long,happy and healthy life together as Mr and Mrs Traynor. X