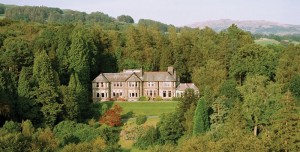 On Saturday October 7th I was fortunate enough to work at one of my favourite wedding venues in the Uk…The Merewood Country Hotelup near Ambleside. The sun was shining and it was a perfect Autumn day for the wedding of John and Lauren, the new Mr and Mrs Spencer.

The Spencer Party has started!

When I arrived at the venue my good pal Howard Wing had the wedding party in full-swing,entertaining the guests with some good old classics like Cant Take My Eyes Off You by Andy Williams and My Girl by The Temptations. After some brilliant speeches from the F.O.B,the groom and bestman we had a quick turn around of the room for the night time party.

The start the night off as is tradition the bride and groom cut their amazing wedding cake (which had been lovingly made by one of the grand-mothers!) after which they had their very first dance as Mr and Mrs Spencer. Howard sung six or seven more songs before I took over. The Spencer wedding guests were really in full-on party mood by now. Plenty of requests were made,which I love,its great to be asked for a song that I has gone off my DJ radar but you know is going to fill the dancefloor. A couple of examples from John and Laurens night are Fleetwood Mac Go Your Own Way and The Baywatch Theme by Jimi Jamison from Survivor! The dancefloor was full all night long with everyone joining in with modern songs mixed in with 60s/70s and party classics!

As usual The Merewood staff were on form and always make me feel like a member of their team up there….unless I play Abba or B*Witched that is! I would like to wish John and Lauren all the best for the future as Mr and Mrs Spencer. 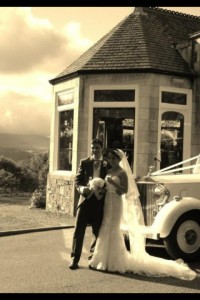