This Sunday November 19th 2017  I am very pleased to announce that I will be at the fabulous Midland Hotel Wedding Showcase. 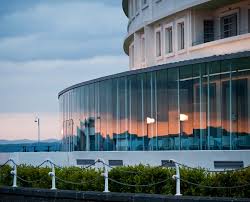 The Midland Hotel is a Streamline Moderne building in Morecambe, Lancashire, England. It was built by the London, Midland and Scottish Railway (LMS), in 1933, to the designs of architect Oliver Hill, with sculpture by Eric Gill, and murals by Eric Ravilious (subsequently destroyed). It is a Grade II* listed building.

The hotel is designed in the Streamline Moderne style of Art Deco. Oliver Hill designed a three-storey curving building, with a central circular tower containing the entrance and a spiral staircase, and a circular cafe at the north end. The front of the hotel is decorated with two Art Deco seahorses, which can be viewed at close proximity from the hotel’s rooftop terrace. 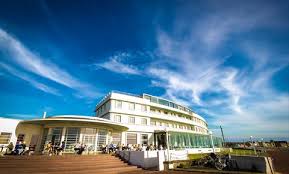 The hotel stands on the seafront with the convex side facing the sea, and the concave side facing the former Morecambe Promenade railway station, in homage to the railway company whose showcase hotel this was. Hill designed the hotel to complement the curve of the promenade, which allowed guests to view spectacular panoramas of the North West coast.

The hotel was used in filming episodes of the TV series Agatha Christie’s Poirot, starring David Suchet, in 1989, most notably in the episode ‘Double Sin’ where Poirot has brought Captain Hastings to stimulate “the little grey cells.” 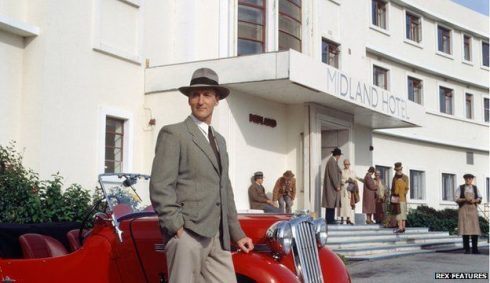 The Midland Hotel is now owned by The English Lakes Hotels chain who I have a long and happy relationship with.

The Hotel will be open between 11 till 3pm for visitors…..I hope to see you there.