About twice a year I am lucky enough

Gary and Howard in The Marquee

to be involved with weddings that have an extra WOW factor to them. This has just happened with back to back weddings this past weekend. Firstly I was out in a marquee on the wettest day of the year for the wedding of Laurie and Josh,the new Mr and Mrs Little.The marquee looked amazing with metres and metres of home-made bunting hanging from the marquee roof. With the rain lashing down and actually seeping through the floor of the marquee spirits were not dampened. The dancefloor was packed all night with music ranging from Take That (which was played just for Joe) to Donald Wheres Your Troosers which was played for all the Scottish Posse who looked very proud in their kilts. After cutting the cake and full on partying despite the weather the bride and groom were leaving at midnight to go and stay in a local hotel. Everyone joined in with a “Tunnel of Love” which lead from the dancefloor to the happy couples waiting car outside. It was a truly memorable day that I thought would take a lot of beating…how wrong I was.

The following day saw myself and Howard Wing up at The Grange Hotel, Grange-Over-Sands for the wedding of Suzanne and Nick,the new Mr and Mrs Laine. The sun was back out shining,I had just about dried out and was ready to party. Howard Wing had the place going crazy especially with his version of King Of The Swingers,performed in this clip by my pals The Swing Commanders. As Howard finished his more dancey second spot with Love Train I mixed straight in with Billie Jean and we were straight into a dance-off between Adam and Dave who both tore the floor up! The night was relentless fun and laughter all the way. I got the groom to perform a blow-up guitar battle with one of the guests,we had one of the best dance offs between the boys I girls I have ever seen and both the bride and the groom had to do the famous leap from I’ve Had The Time Of My Life from Dirty Dancing. In between all this I had to do a session mix of UK Garage,something I have never done before but completely nailed. This included songs like Dj Luck and Mc Neat With A little Bit Of Luck and DJ Pied Piper and The MCs Do you Really Like It…I love a challenge like this. I also did a boyband mix which included The Backstreet Boys, 5ive,NSYNC and the one that reall got it going…Blue All Rise. This was a stunning night of fun and laughter, I would like to thank all of Mr and Mrs Laines family and friends for being such good fun and joining in. Good luck to you both Suzie and Nick,have a great honeymoon in the USA and Hawaii. 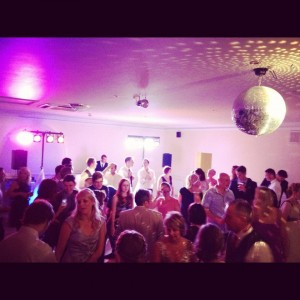