As of today I am very proud to announce that I am now one of Castle Green Hotels preferred Wedding DJ’s. Castle Green is an award winning Venue based in Kendal. Castle Green Hotel opened in December 1997 but the building itself dates back to 1847, when Thompson Bindloss, a Kendal Ironmonger bought the site for £3450. He built the house which today forms the Business and Training Centre and the executive bedrooms. He left the house to his nephew, William Bindloss, who was Kendal’s Mayor six times. When William died, he donated the house to the Borough of Kendal in his will in 1895. The house was sold and the proceeds were used to extend the Town Hall and to build the clock tower, which is a feature of Kendal today. 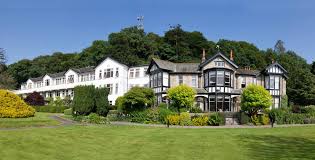 Between 1949 and 1995 the house was owned the Electricity Board as their area offices and around 300 local people worked in the building. James and Catherine Alexander, previously owners of the Grange Hotel in Grange-over-Sands, bought the property in 1995 and had the vision to convert and extend it into a perfect hotel for Kendal. James and Catherine are the sole shareholders of the Castle Green Hotel and are proud that once again more than one hundred people are employed here.